Customer’s loan paid off after KIA

Even in peacetime, members of our military accept daily risks and sometimes make the ultimate sacrifice during their course of duty. When this happens, their loved ones are often left behind with concerns about their future, and must rely on others for support.

Recently, Caliber Home Loans, Inc. joined a New York non-profit and members of the local community in posthumously thanking a fallen hero by helping to pay his young family’s mortgage in full.

Staff Sgt. Dashan Briggs, a member of the New York Air National Guard's 106th Rescue Wing, died along with six other American military personnel in March 2018 when their helicopter crashed in Iraq, near the Syrian border. After receiving news of the tragedy, New York nonprofit Stephen Siller Tunnel to Towers Foundation promised Briggs’ wife and two small children that their future would be secured.

A coalition of caring

As a first step to help the Briggs family, Caliber donated over $33,000 which represented the yearly mortgage payment and which allowed the family to get back on their feet. Then, with the generous financial assistance of Tunnel to Towers, the Briggs family mortgage was paid off in full. 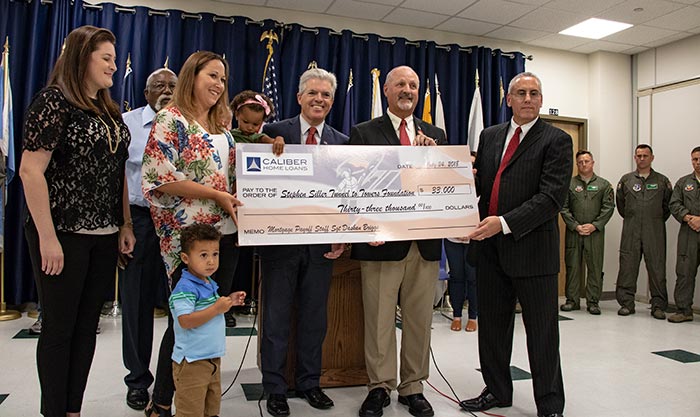 During an emotional ceremony in Suffolk County, Tech Sgt. Briggs’ wife Rebecca received the news that their family home’s mortgage had been paid. Accompanied by Brittany H. Boccher, 2017’s Armed Forces Insurance Military Spouse of the Year, Joseph Ferraro presented a check for $33,000 to Frank Siller, Chairman and CEO of Tunnel to Towers.

"To be able to stay in our home forever, and where our memories were made... I won’t have to work multiple jobs and I can be there for my kids. I’m forever grateful," Briggs’ widow, Rebecca, said.

About the Stephen Siller Tunnel to Towers Foundation

Tunnel to Towers refers to the final run FDNY Stephen Siller made on 9/11. Carrying over 60 lbs. of gear, he ran through a blocked-off Brooklyn Battery Tunnel (now the Hugh L. Carey Tunnel) to the Twin Towers where he gave up his life while saving others.

To honor Siller’s sacrifice, The Tunnel to Towers Foundation’s Fallen First Responders Home Program was created, offering financial assistance to the families of firefighters, police officers and other first responders lost in the line of duty.

Tunnel to Towers is a registered non-profit and 100% percent of public donations go directly to the families of these heroes.