Military Spouse of the Year Speaks at Caliber 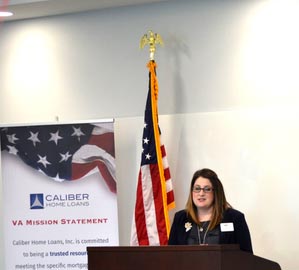 Caliber Home Loans’ annual Veterans Day Luncheon was held November 10th at corporate headquarters in Coppell, Texas. One of the highlights of this year’s event was keynote speaker Brittany Boccher, who was recently selected as the 2017 Armed Forces Insurance Military Spouse of the Year.

Currently stationed at the Little Rock Air Force Base with her husband and two children, Brittany has been an Air Force spouse for 11 years. During this time, she’s racked up an amazing number of accomplishments that have improved life for military families, veterans and children with special needs. These include founding the Down Syndrome Advancement Coalition Tank Filled Life project and participating in the signing of House Bill 1162 which introduced a tax cut for Arkansas’ retired military veterans.

Holder of a Masters’ degree in Nonprofit Leadership and Management, Brittany describes herself as CEO of her household. She wears plenty of hats, including chef, event planner, teacher, accountant and chauffeur.

Brittany has often shared her concerns regarding the effect of military deployment on the families and children often left behind for prolonged periods of time. Her service as President of the Little Rock Spouses’ Club includes being the “go-to” spouse when others have questions or problems related to their spouses’ deployments or PCS moves.

During her speech, Brittany thanked Caliber for their VA lending initiatives and community support. She shared her own story of the unique challenges that military families face when buying a home, and discussed the continuing need for military buyers’ education. Brittany also shared her belief that Caliber’s veteran employees were a great asset to the company because of the principle of “Service before self” they brought to their jobs.