Moving with The Military: Caliber is Creating Homes, Not Just Houses 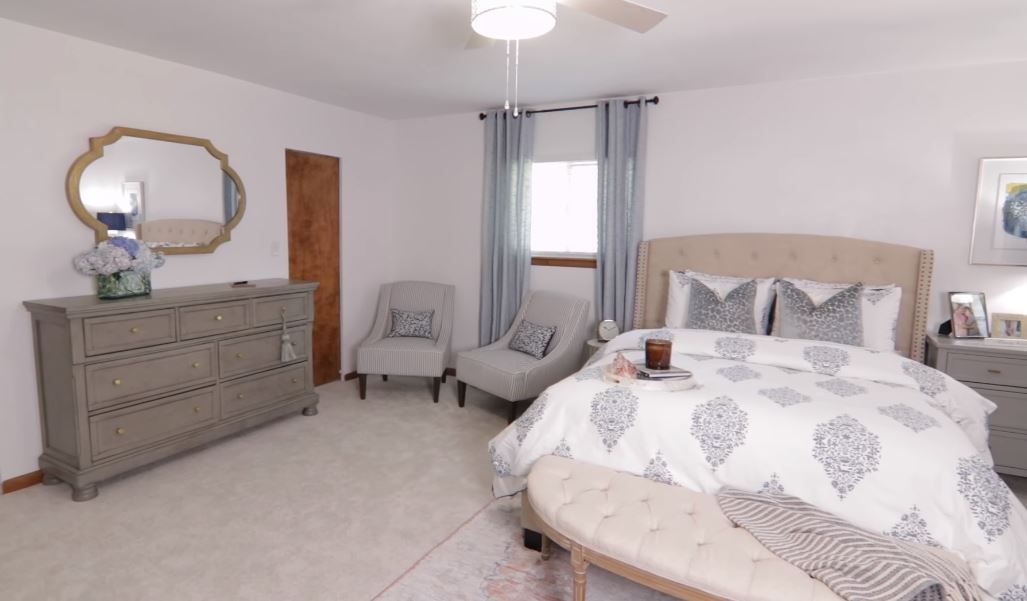 The summer of 2021 was one to remember as it was dedicated to improving the lives of military families, veterans and demonstrated the collective power of the military community in supporting those in need.

The first stop was the home of a retired Navy SEAL and first responder where our team started by removing old wallpaper and adding fresh paint. Maria Reed, CEO of MWTM and Army spouse explained, “we started it as just a bedroom makeover but when we arrived, we realized the bathroom was also in need of some help,”

Despite a few challenges, Reed said the team was determined. “Though we had a limited budget, we got creative. Simple updates really transformed the space and made a big difference. We rehabbed the vanity and made it appear brand new.” The volunteers also changed out the faucets and light fixtures, repainted the walls, and replaced the carpet.

Reed added, “we even added a wood slat focal wall and utilized the old sliding closet into a brand-new piece. Then we found some amazing new furniture and artwork. The surprise photoshoot with he and his wife of 50 years was very special.”

Reed stressed the importance of teamwork in this makeover and the vital importance of every person who came out to support the project. “Between the local community, UDT SEAL Association members, and the Caliber Home Loans employees, it was incredible. Without them, we wouldn’t have been able to do what we did for this makeover mission.”

That same “can-do-will-do attitude” carried over to the next makeover at North Charleston High School. Up to that time, the transformative power of creating sanctuaries had been focused on the military and veteran community. This time, however, MWTM and CHL went all in to support a Title I school. The principal of the school had been featured on the Today Show after it was discovered he was working a night job stocking shelves at Walmart be able to provide for his students in need. With over 90% of the population living below the poverty line, he wanted to do something.

When Reed and the people at CHL became aware of the Today Show feature they knew they needed to do something as well. This time the entire makeover would be manned by active-duty Coast Guardsman, Airman, veterans, and military spouses. Reed explained, “We built a pantry stocked with all the items kids need and would love. It was important that it feel like a fun place to be and take away any lingering feelings of shame. We had students help us in the design and it turned out incredible.”

Additionally, through a partnership with Lowe’s, the school received three washers and dryers and the team of volunteers transformed an old storage space into a laundry room. Here deserving students could wash their clothes. “We made it Instagram-able and fun. A place they could come be themselves and relax.”

During the volunteer work at the school, the USO South Carolina arrived with their mobile RV to provide meals to the volunteers as well as to local families. Soon, many emotional community members cheered on the principal as he walked in to survey the upgrades.

Next, Reed and her team headed west to San Diego, California. This time the mission was to surprise a surviving Navy spouse with a rooftop oasis. “It was an area unused at the top of their apartment featuring mismatching furniture pieces,” Reed said. “The Caliber volunteers carried out the task of bringing in brand new furniture and working to design a space that would be perfect for entertaining.”

From there it was off to one last makeover in 29 Palms CA where the team honored a Marine veteran with a home office and dining space. “The Chappell’s have four children and didn’t have an area to eat as a family. We created two distinct spaces by using removable wallpaper and area rugs to create a base for how the areas could be defined.”

Reed added that the design itself was very “BoHo Chic” while also maintaining a high functionality and family-friendly vibe. “Thanks to the local team of Caliber volunteers from the area the space turned out absolutely stunning.”

The makeovers personify the power of community and the desire to serve and honor those who serve. “More than a mortgage” are more than just words for Caliber, they’re a commitment and a continued determination to make the world a better place – one mission at a time.