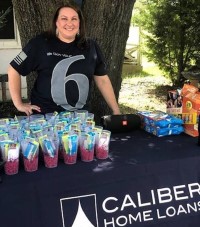 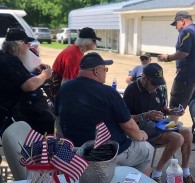 In recognition of Military May 2019, Bryan Bergjans, National Director of Military Lending sent the entire Caliber Home Loans, Inc. Family a call to action in April. He encouraged everyone to get involved and volunteer their time, skills, and talents to help uniformed service members and veteran families in their local communities.

When D’Ann McConnell, a Caliber Home Loans, Inc. Loan Consultant received Bryan’s challenge she was inspired to do something. She wasn’t sure what but knew she wanted to show her gratitude to our heroes. As a 27-year resident of Wylie, Texas, a suburb east of Dallas, D’Ann knew there was a strong military presence in her town. There is a National Guard Armory nearby that includes a community sponsored food pantry for veterans and a new veteran chapter was recently established.

After tossing around several ideas D’Ann decided to partner with some of her mortgage industry colleagues. This partnership included a realtor, whose father is a veteran, and representatives from a local title company, and an insurance company. Together they began planning how to successfully host their first-ever Military Appreciation Luncheon. Once they confirmed a location, Coldwell Banker’s office, D’Ann and her team created flyers and posted on social media to help get the word out. The event was held on May 24th and approximately 30 people attended, with more than 20 being past or current military personnel. Several were from the American Legion Hale-Combest Post #315 of Wylie. D’Ann was very pleased with the turnout and helping create an event that connected veterans with other veterans.

The luncheon began with introductions and quickly spread to veterans bonding and making new acquaintances to enjoying grilled hamburgers and hot dogs. It was simple and sweet, yet meaningful and filled with gratitude to and from the veterans and servicemembers. Many of the participating veterans voiced their appreciation for D’Ann organizing the luncheon and providing them with a chance to connect with other veterans.

When asked if she was pleased with the event, she responded, “I was very humbled to be able to honor the veterans. It gave me, as a civilian, a warm feeling of patriotism. And it was nice to bring other agents in the mortgage industry together. It was fun and rewarding”.

D’Ann is looking forward to continuing this event next year and loves the thought of getting more people involved. She also encourages others to make a commitment to help veterans and servicemembers in their local areas.