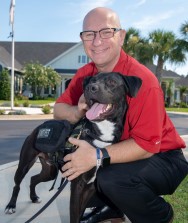 In 2017, Caliber’s Jacksonville team began a partnership with K9s for Warriors. Their goal was to raise funds, donate time, and to help the organization provide highly-skilled service dogs that assist veterans with Post-Traumatic Stress Disorder and other conditions.

Caliber and Branch Manager, Aaron Duez, have chosen to contribute a portion of the proceeds from each of his funded VA loans to K9s for Warriors. Earlier this year, he met his goal of $20,000, enough to pay for one service dog! This amount covers the costs of raising and housing the pup, along with several months of specialized training.

On July 18th, “Caliber” the service dog (appropriately named by Mr. Duez) graduated from the K9s for Warriors training program, and was gifted to a veteran named Jordan.

Jordan & Caliber’s journey together has just begun; here is a testimonial from one brave hero who has already completed and experienced the benefits of the program:

“K9s has opened the door to my life again by giving me Vinny. It’s a family trying to save one brother and sister at a time. It is now up to me to continue stepping forward.”

Most of the dogs in the K9s for Warriors program come from high-kill and rescue shelters. Before a K9 service dog is ever gifted to a warrior, they first spend several months with a loving volunteer who raises them. The volunteer attends training sessions alongside their puppy, twice a month. Once the training is complete, the puppy is returned to the K9s for Warriors organization where the pup is placed with one deserving warrior (post-9/11 military veteran).

Once the dog is paired with a warrior, the two attend a three-week training program as a team. Throughout the program the warrior gains the emotional means to repair their relationship with themselves, their family, and their friends. Each service dog carefully assists their service member to overcome symptoms of PTSD, and other conditions, and regain their physical and emotional dignity and independence.

To learn more about how you can help K9s for Warriors, click here.