Caliber Home Loans in Jacksonville recently hosted a Lunch and Learn for over 45 Realtors® and other industry professionals. Participants learned best practices to better serve the needs of military and veteran home buyers through the VA loan program. And, in true Caliber form, the team showed how Caliber’s commitment to our servicemen and women goes beyond offering VA loans.

Caliber’s Commitment to Veterans Encourages Others

In 2017, Caliber Sales Manager, Aaron Duez, and the Jacksonville team began their partnership with K9s for Warriors. The team raises funds and donates their time to help K9s for Warriors train and provide assistance dogs to veterans with PTSD, among other conditions. At another event hosted by Aaron and his team, Paul Bednar of ERA® Real Estate first learned of the mission of K9s for Warriors. Paul signed up to become a puppy raiser soon thereafter.

From Puppy to Warrior’s Best Friend

The canine is in training for about another 2-4 months before they are assigned to a warrior.  The added training time is to ensure that the puppy is ready for the new responsibility of serving one of our veterans.

When the puppy enters his or her last few months of training, the hand off is bittersweet and very emotional. A special bond develops while the puppy is with the raiser. But, both puppy and raiser know it’s for a much bigger cause.

Graduation day will come and the puppy will become a best friend to a warrior faced with PTSD. It is life changing for all involved, as evidenced by the fact that 95% of puppy raisers sign up for another puppy right after the graduation of their canine!

More Can Be Done 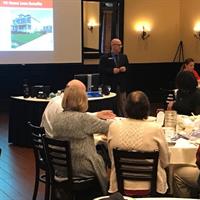 K9s for Warriors has an amazing group of breeders who wish to donate puppies, but the organization does not have enough puppy raisers. That is why Aaron and the Jacksonville Caliber team hold a meet and greet at K9s For Warriors once a year. They bring Realtors® to see the K9s for Warriors so they can hear about the great work done there. The hope is that some of the event attendees will step forward and make the rewarding choice to help the group.

If being a puppy raiser speaks to you, know that K9s for Warriors provides you with everything you need to be a puppy raiser. You receive a crate, leashes, collars, and food for the puppy. Veterinary care is provided in the Jacksonville, Florida area, and the organization covers the cost of such care. All they need is someone like you to train and love on the K9, as there is a much bigger purpose for the puppy.

To learn more about K9s for Warriors, donate or volunteer as a puppy raiser or in another capacity, visit  www.k9sforwarriors.org/get-involved.