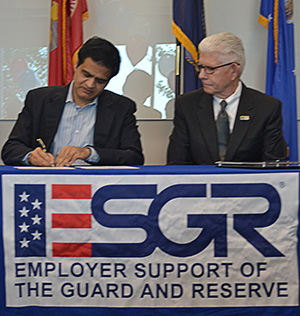 Caliber Home Loans was recently recognized by Employer Support of the Guard and Reserve (ESGR) for its commitment to our military and veterans. Caliber CEO Sanjiv Das signed our Statement of Support at a special luncheon honoring active reservists and local veterans at our Coppell, TX headquarters. Several members of our executive leadership team also attended the luncheon and extended their appreciation of our employees who serve – or have served – our country.

"I am proud to be a part of Caliber Home Loans as they reaffirmed their commitment to the military and veteran communities. They flew all their active reserve employees to Corporate so we could witness Sanjiv Das, CEO, signing the reaffirmation to this commitment with ESGR. Thanks to Bryan Bergjans for the invitation and leading the efforts for our company," said Caliber Loan Consultant and US Army Reserves SFC, Melvin Diaz.

Caliber was also presented with the Seven Seals Award, a prestigious honor given for support of the men and women who serve in the National Guard and Reserve. It honors an organization’s significant efforts in promoting and supporting the ESGR mission: fostering a culture in which employers value military service members as employees. The award is symbolic of the seven services: Army National Guard, Army Reserve, Navy Reserve, Marine Corps Reserve, Air National Guard, Air Force Reserve, and Coast Guard Reserve.

Caliber is proud to be recognized with the Seven Seals Award.