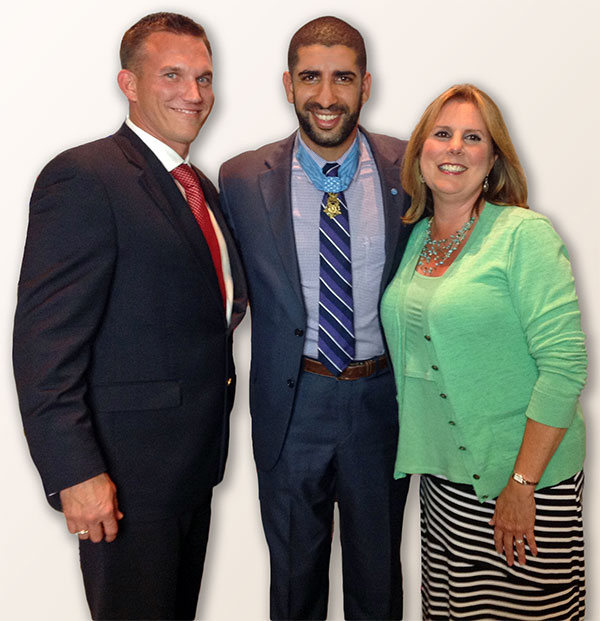 Captain Groberg was awarded the United States Medal of Honor by President Barack Obama in November 2015, in recognition of his service with Task Force Mountain Warrior in Kunar Province, Afghanistan.

The Medal of Honor is the highest, most prestigious U.S military decoration, awarded for gallantry and bravery in combat at the risk of life above and beyond the call of duty.

During Captain Groberg’s keynote speech, he spoke about how important home ownership is to veterans transitioning back to the U.S from overseas. He also took the opportunity to thank Caliber Home Loans for helping him with his first home purchase! Due to the superior level of customer service provided by Caliber Branch Manager John Downs and his team, Captain Groberg is still a Caliber client today.

Retired U.S. Army Capt. Florent "Flo" Groberg was born in Poissy, France in 1983 and became a naturalized U.S. citizen in 2001. Groberg attended the University of Maryland, College Park (UMD) and competed in varsity track and cross country events. He graduated with a bachelor's degree in criminology and criminal justice.

Groberg entered the Army in July 2008 and attended Officer Candidate School at Fort Benning, Georgia. He received his commission as an infantry officer in December 2008. After completing Infantry Officer Basic Course, Mechanized Leaders Course, U.S. Army Airborne and U.S. Army Ranger Schools, he was assigned to the 4th Infantry Division as a platoon leader.

In November 2009, he deployed to Afghanistan as part of Task Force Lethal, with responsibility for the Pech River Valley in Afghanistan's Kunar Province. Upon returning home in June 2010, he continued serving as a platoon leader until he was reassigned as an infantry company executive officer from October 2010 to November 2011. He was then assigned as the brigade personal security detachment commander for 4th Infantry Brigade Combat Team, 4th Infantry Division.

He deployed again to Kunar Province, Afghanistan, in February of 2012, with Task Force Mountain Warrior. He was promoted to captain in July 2012.

As the patrol advanced toward the governor's compound in Kunar for a security meeting, they reached a small bridge spanning a canal. The patrol halted near the bridge as two motorcycles approached from the opposite direction. The motorcyclists began crossing the bridge, but stopped midway before dismounting and retreating in the opposite direction.

The explosion caused a second suicide bomber, who remained hidden behind a small structure near the road, to detonate his vest prematurely.

Groberg's actions disrupted both bombers from detonating as planned, saving the majority of lives he was charged with protecting. He sustained the loss of 50% of his left calf muscle with significant nerve damage, a blown eardrum, and a mild traumatic brain injury. Groberg recovered at Walter Reed National Military Medical Center and was medically retired in July 2015.

Groberg currently resides in the National Capital Region and is a civilian employee of the Department of Defense.