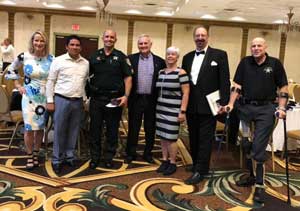 The event, also sponsored by Hiers-Baxley Community Care, was the brain-child of VHV’s Executive Director, Hank Whittier. Hank wanted to bring light to the many services our first responders provide to their communities. Caliber’s own Jinky Diaz, civilian member on the board of VHV, helped to coordinate the event.

Several municipal and elected officials attended the event, including Representative Daniel Webster.  Webster shared that he was “thankful” for first responders.  He admired those who “put their lives on the line for me and others in the community."

The keynote speaker was Reverend Chris Whaley. He is pastor of First Baptist Church of Orlando and chaplain for the Seminole County Fire Department.  He said first responders were the “tip of the spear” and would “run into burning buildings to save lives.”

The Heroes Recognition Breakfast honored members from Marion, Alachua, Lake, Levy, Sumter and Citrus counties in Florida. Several were singled out for special recognition. Specific honorees by county are listed below.

Marion County: Officer Robert Gravel, of the Ocala Police Department, was awarded the 2018 Hometown Hero Award for School Resource Officer. Gravel apprehended a student who brought a .380 handgun to school in his backpack. 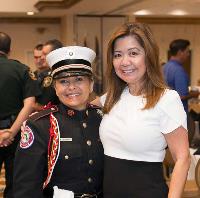 Alachua County: Fire Rescue Captain, Joseph Malphurs, Lt. Steven Jarvis, and Firefighter Mark Finlay spotted a burning car while returning from a call. Before donning bunker gear, they rushed to save an adult and three children who were severely injured.

Citrus County: Citrus County Sheriff’s Office Deputies Ethan Vanscoy, Russell Howard and David Elias were among the event’s honorees. The Deputies responded, May 6th, to a reported suicide by hanging. Two deputies lifted the body while the other deputy freed the person, who survived.

For more information on the amazing feats of each of these first responders, read Hometown Heroes event honors responders in six counties.

To learn more about Veterans Helping Veterans USA, visit their website at VHVUSA.org.