Caliber Helping Save Lives with K9s for Warriors

Caliber’s commitment to servicemen and women goes far beyond homeownership. We care about supporting veterans in their everyday lives.

Caliber’s Partnership with K9s for Warriors

It takes a minimum of $20,000 to sponsor a K9 through this program. Both Aaron and Caliber each committed to donating $500.00 for every VA loan closing. By November 2018, Caliber, Aaron, and his team donated over $40,000 to sponsor two canines. Sponsorship means donating funds for canines to undergo service animal training at no cost to the veteran. Once training is complete, the canine is later connected to a veteran.

Caliber competes for the cause 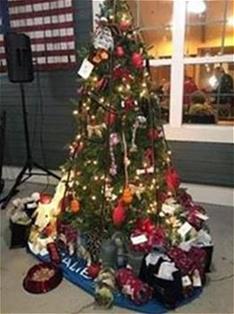 Each year K9s for Warriors conducts a Best Decorated Tree contest. With an entry fee of $5,000, K9s partners compete for a chance to win a full sponsorship including canine naming rights. Aaron personally donated the $5,000 to enter the contest. Not only did they enter the contest, but they won first prize!

Many of the team’s realtors chipped in to donate 160 fleece blankets, 40 chew toys, 21 collars, and 15 leashes for the winning tree. All items were given to K9’s for Warriors to help with the cost of setting up a veteran with an animal.

This gave the team their third K9 sponsorship for 2018, which is no small feat. The first dog will be joined with a Veteran during the March 2019 graduating class. His name is Caliber.

Caliber, Aaron, and his team plan to sponsor at least three to four canines this year! Recognizing that it will be challenging to top three sponsorships in 2018, they remain committed to helping one veteran at a time.

K9s for Warriors is a non-profit organization located near Jacksonville, Florida. Their mission is to connect service canines with warriors to empower them to return to civilian life with dignity and independence. They are the nation's largest provider of service dogs for disabled American veterans. Most of the canines are adopted from high kill shelters and are later trained to become service animals.

The organization recently posted a milestone of rescuing over 500 Veterans and nearly 1000 canines since opening in March 2011. This gives Veterans a new outlook on life by empowering them to return to civilian life with dignity and independence. Aaron said, “It’s truly amazing to see the transformation of these men and women after being issued a trained K9."

According to The MilitaryTimes, a new VA study indicates an average of 20 veterans commits suicide every day due to PTSD. There are several ways to give back to military heroes and rescue dogs. You can donate your time or treasure, host a community event, and sponsor a Service K9. To learn more about K9s for Warriors or contribute to saving warriors and canines visit www.k9sforwarriors.org.