Here are details of this transaction, as told by Bryan:

“Recently my team served a United States Army Sergeant who had completed three overseas tours as the leader of an infantry Mortar Squad. He described his role with the Mortar Squad as being the “Conductor of the Orchestra”. The Sergeant was also a father of three, a loving husband and a great guy.

“We all worked closely with the Sergeant during his VA loan transaction. He repeatedly thanked me and my team members, including loan processor Nicole Osborne and VA underwriter Tim Bookout, for all we were doing for him to get his loan closed quickly. I was always quick to reply that it was our team who was thankful for all he had done for us.

“The Sergeant’s closing date arrived and we met to sign the closing documents. As we shook hands and said goodbye, he slipped something into my hand on his way out the door. I thought that maybe the Sergeant didn’t want others to see what he’d given me so I didn’t take a good look at the object until a few minutes later. I saw that the Sergeant had given me a military pin. 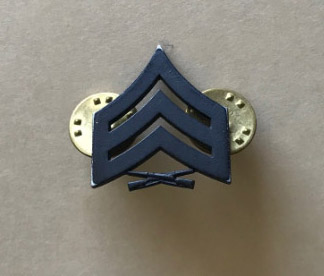 “I was intrigued, and asked the Sergeant to come outside with me and tell me what sort of pin he’d just given me. He explained it was the Rank Pin he’d worn during his last deployment, and he and his wife had decided that I should have the pin as thanks for what Caliber had done for his family. He added that he’d not had the easiest time since arriving back in the United States, but buying his new home was a major step closer to normalcy.

“After I realized how important the Rank Pin was, I told him we couldn’t accept it. But he insisted. I still have goosebumps thinking about that day, as it was the greatest moment of my career.

“I would like to remind everyone who works to assist our military that, despite the difficulties and stresses we endure, our actions make a major difference to our service personnel. We should all take pride in our role.”