Caliber hosted its 3rd Annual Veterans Luncheon on Tuesday, November 6th at its corporate headquarters in Coppell, Texas. Caliber was fortunate to have Krista Simpson Anderson as the featured speaker. She was recently named the 2018 Armed Forces Insurance Military Spouse of the Year and currently serves as the Gold Star Spouse of Special Forces. 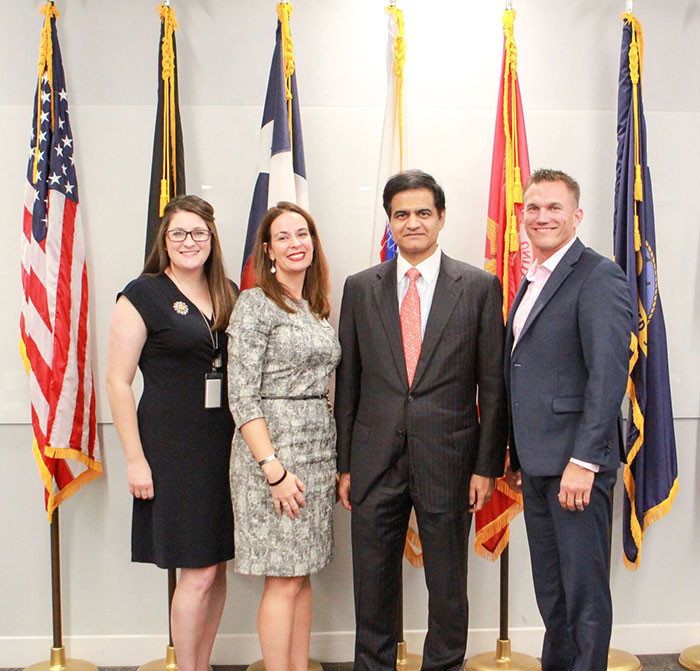 Krista has been quoted as saying, "...every act of kindness does and can change the world." Her belief in this statement is evident from organizing spur-of-the-moment community rallies when someone is in need to volunteering on several boards. She often travels to share her family’s journey and to help shine a light on the numerous organizations that help military families.

The Journey from Hurt to Healing

Krista lost her husband, Staff Sgt. Michael H. Simpson in 2013. He was a part of the U.S. Army Special Forces and was killed in action while serving in Afghanistan.

Her healing process began by volunteering at various non-profits to help other military families faced with loss. She understood their struggle and wanted to show her support. After all, this was the same community that helped Krista and her two young sons during their time of grief.

Shortly afterward she founded her own nonprofit, The Unquiet Professional (TUP) in memory of her husband, Michael. TUP’s mission is to honor our nation’s Gold Star Families, Military Families, and Veterans. Gold Star Families are immediate family members of the U.S. Armed Forces killed in combat or in support of certain military activities.

Krista is deeply committed to caring for her family and serving others. She is a liaison and advisory board member for several military organizations. This also includes speaking engagements for Folds of Honor which gives her a chance to share with those who may never meet a service member or their family. In addition to the numerous affiliations, Krista volunteers at her children’s school and her family’s parish.

During her speech, Krista spoke about the nuances of home buying for military families. In her experience, she had to obtain a loan, move in a short period, all while seven months pregnant with a toddler and a husband deployed overseas. Since Krista’s new home would be temporary, she chose an adjustable rate mortgage (ARM) rather than a fixed rate loan. She emphasized how the military community instantly trust a referral from another military family.

Krista was thankful for the opportunity to share her story and Caliber’s commitment to assisting military homebuyers reach their dream of homeownership.