2016: a year of commitment, service and understanding

Ever since Caliber Home Loans began planning our first Military and Veterans initiatives, we’ve been working to expand our services to the members of the United States Armed Forces. Recently we were proud to be honored for our support of Caliber’s National Guard and Reserve employees.

Several of our leaders met with the Employer Support of the Guard and Reserve (ESGR), a Department of Defense program that was established in 1972 to promote positive relationships between Reserve Service members and their civilian employers. During the meeting, Caliber CEO Sanjiv Das signed a Statement of Support for the National Guard and Reserve.

Next, the ESGR Patriot Award was presented to Sanjiv Das, John Bianchi, and Mike Heyen for their personal support of Caliber’s National Guard and Reserve employees. Caliber was also presented with the ESGR Above and Beyond Award for the supportive workplace culture created for military families.

Each award recipient was nominated for his award by one or more Caliber National Guard and Reserve employees who believed that they deserved recognition for their efforts. 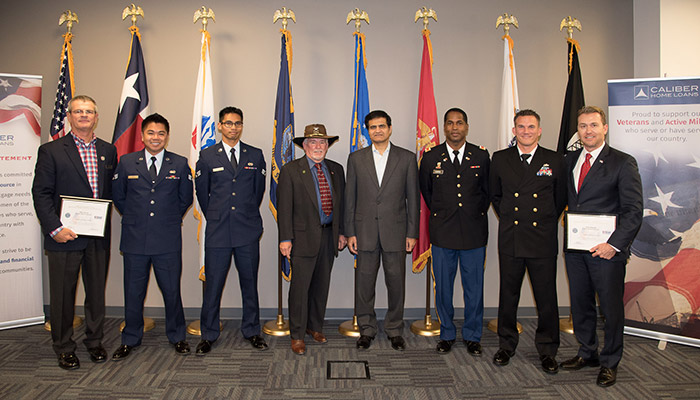