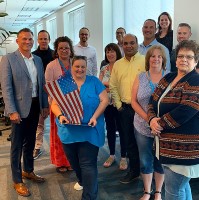 As part of the Military May tradition at Caliber Home Loans, departments at headquarters and branches across the country were encouraged to show their patriotism through office decorations. Since Caliber’s first decorating contest in May 2016, participation has grown.

Caliber thanks all who generously contributed to the success of Military May this year. A special thanks goes to the Consumer Direct sales team and the Finance & Treasury department for going above and beyond what was expected.

Consumer Direct collected supplies for Patriot Paws and gave a $325 cash donation, all while coordinating the company-wide effort which totaled approximately $1,500 and another $2,500 in dog supplies. The Finance & Treasury department teamed up to collect care package items for deployed servicemembers. Next, Finance & Treasury partnered with a Blue Star Mom’s group that will help with the packing and shipping.

Both departments were presented with Caliber’s Military May Patriot Award on Monday, July 8th.